So, I started traveling more for work in 1994, my first trip overseas was to Sweden in 1996 then to England and Scotland in 1997.  But those trips were not very long, in big cities, and let's face it, despite some of the goings on at soccer games we've seen, they are all very civilized places.  My parents were happy I got to travel for work.  So was George, but also a touch jealous since she was home with the kids while I got to travel.  I didn't eat much of the "fish" stuff in Sweden, didn't try haggis in Scotland and tried kippers in England but didn't finish them.

Then in 2000 I traveled to Australia for work in June and I loved it.  Does anybody NOT love Australia?  I have certainly not met anybody that doesn't.  But again, for the most part, big cities, or mines, and I'd been to a lot of mines and smaller mine towns here in North America.  A lot more beer to try but the food was pretty much what I was used to here except for a disconcerting habit of putting pineapple on pizza and cucumbers and pickled beets on sandwiches.  Then in September of that year I went to Indonesia. Specifically Irian Jaya in Indonesia.  (I guess now it's called Papua, at least the part I went to). 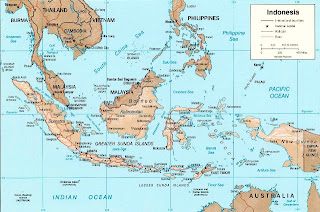 Where I went was way to the east (or right to those less directionally inclined) north of the small town called Timika up in the mountains.  I'll talk more about that trip sometime but this is explaining how I got started traveling to remote and wild places and eating anything and everything.

Before I went I was asked several interesting questions:  Have you ever traveled to a 3rd world country?  (Um... no)  Have you ever been to Jakarta or another city dangerous to Americans?  (um... no)  And by the way, only take the hotel courtesy bus to and from the hotel, do NOT leave hotel property and better yet stay in your room with the door locked and order room service.  (Holy shit, now you're freaking me out a little!)  Bring cash, they don't use credit cards there, BTW $300 US = 2,700,000 rupiah... I was a millionaire!  Okay, it was in rupiah, but still!

Anyway, I made up my mind before I went that I was going to eat anything and everything put in front of me without asking what was in it or anything else.  If I hated it?  I didn't have to eat it again, if it was just eh... well, I could eat it, no big deal.  So, I ate... everything.  And for the most part, I liked it all.  It wasn't like chilled monkey brains or anything like that, but it was definitely different from Indiana food.  And from that point on I decided eating everything put in front of me was not a bad idea.  As Andrew Zimmern says, "If it looks good, eat it!"  Even if it doesn't look good... what the hell... at least you tried it.