Looking back at India

Okay, maybe I'm not cut out for blogging.  Or maybe I blog best when I have lots of time with nothing else to do.  I think part of the problem stems from my last little rant about India.  There is so much I really liked about it, I won't repeat it all here, but that last little bit, dealing with all the ridiculous BS of "security" at the airport effected my view of the country.  And I have to stop doing that.  So let me load some pictures and give some more background to my trip so I can get to China!

This was an Indian... band?... I'm not sure that's the right word, but I have no idea what the right word would be so I'll go with that.   They played at a work function we had and while I never (ever) listened to Indian music, unless I was in an Indian restaurant, I liked it, a lot.  I took a video, but it's huge and I need to be on a much faster connection before I try uploading that. 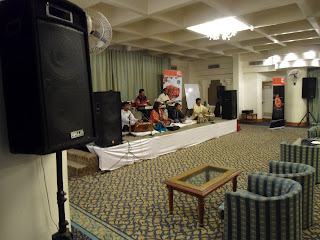 Another picture of the band, but also the (whatever it's called) that the girl there is wearing.  (Side note; I do not mean anything bad when I say girl.  Men and women are old... I'm not old, so how can I be a man?  It makes no sense sometimes.  Likewise, women my age?  younger?  they must be girls...right?  So I hope nobody takes offense, there is none intended,  and if you do?  Well you can just not come back again, okay?) 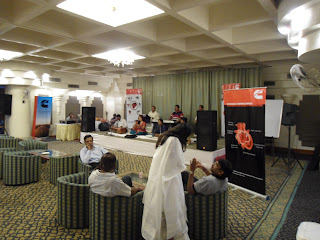 On the highway to Mumbai... interesting tunnels, and no pictures turned out of them, but the inside walls were unfinished, even raw and rugged looking.  Very unlike all the tiled and finished tunnels I have seen before. 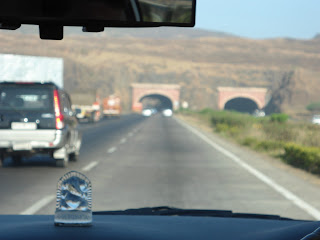 Several pictures of a rest stop on the highway... 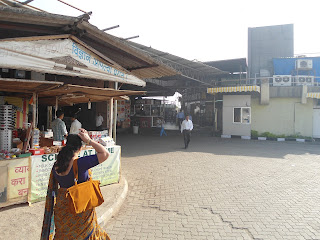 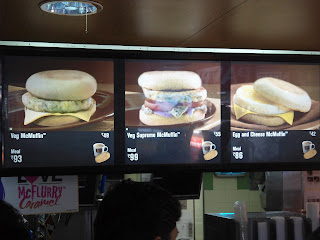 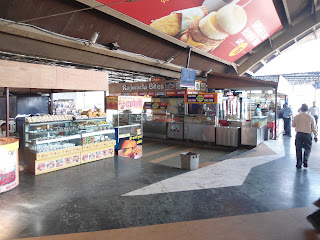 Papa John's was closed, and looked like it had been for some time.  The guys we were travelling with said American chains that come into the Indian market always failed.  Once they came in with Indian flavors, and Indian style foods, like the veg McMuffin, they made progress, then started adding the American flavors.  Now, I love food, and I love American food, and nothing, I mean NOTHING, tastes better than a hamburger after an extended trip overseas, but even I acknowledge American food is bland compared to Indian food.  I'm not sure why that succeeds in India. 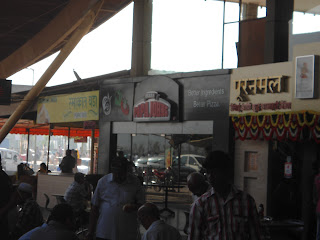 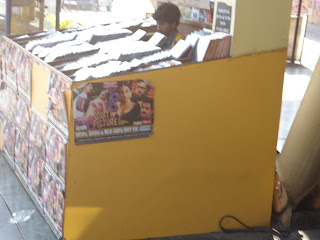 They even had a ferris wheel!  Now... it looked like it hadn't been used in years, and there was no way in hell I was getting close enough for it to fall on me should it pick that moment to rust to pieces... but i thought it was picture worthy... 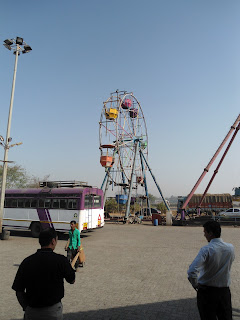 I think Americans would be healthier if there was more food like this at our interstate stops... not that I'd eat any of it, but for others... yeah I think it would be a good idea. 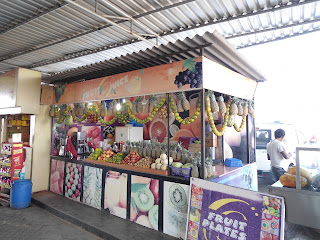 This was a post holding up the canopy that apparently somebody backed into, causing the post to bend, and it was repaired (or maybe connected in the first place?) with 2 pieces of rebar that are now cracked as well.  That fills me with all sorts of confidence!  Where is that ferris wheel again? 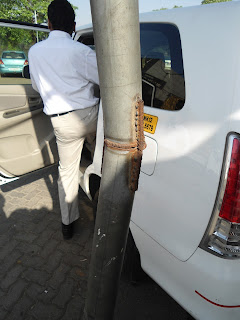 These motorized rickshaws were everywhere... all the time.  And looking at this picture I cannot recall why I thought I should take a picture of it, but it is a typical example of the thing.  I did not ride in one this trip but I think I should at some point. 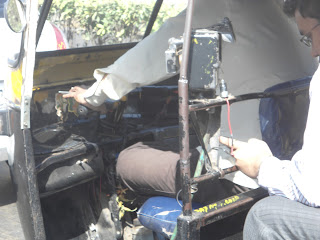 Just some women (girls?) with kids.  1 thing we noticed was that kids were walking right by all the insane traffic, with apparently not a care in the world, and the parents, if they were around, did not seem concerned either.  WTF?  I'd be a nervous wreck, I almost was anyway, on their behalf. 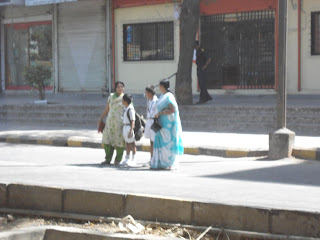 A view out my window in Pune, India 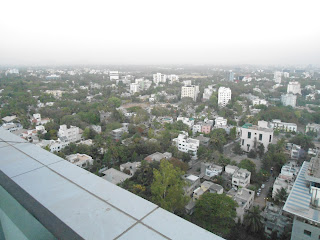 Nothing remarkable about this, and I did not go in the store, but how could I pass on a picture of a place called Pantaloons?  Obviously I could not. 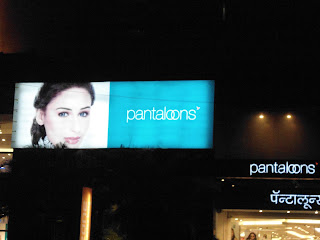 Now, I am not a big fan of the handheld shower thing, it always seems to turn and not do what I want it to do.  So when I first saw it I thought "Shit!  A week of fighting to keep the water spraying on me!"  I did not notice the HUGE shower head in the ceiling... only noticed it when i pulled the knob and got soaked with not-quite-warm water from above.  I decided I love the huge shower head in the ceiling, I could get used to that.  And I figure it's good practice for if/when I ever get to shower under a waterfall. 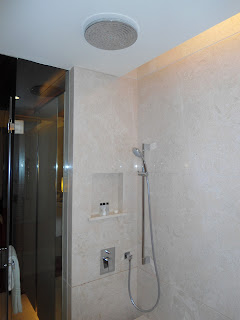 This looks like just another picture of traffic in Pune till you notice the woman (girl?) on the back of that scooter is in uniform and carrying a semi-automatic rifle!  Impressive! 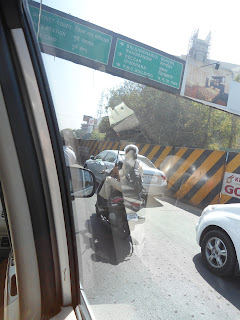 Just a few of the motorcycles and scooters parked on Mohandas Ghandhi Way in Pune... 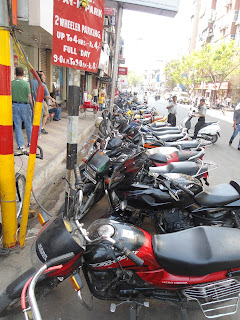 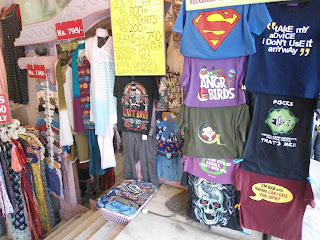 Just another cart full of coconuts.  They thought it was hilarious I was taking a picture of it.  But hey, not a typical sight in Indiana... 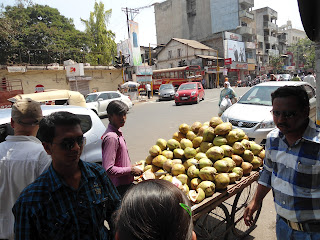 A fort in Pune, the brochure said Gardens!  Fountains!  eh... not so much.  The fountains were not on, the gardens were empty, but there were some interesting things to see in it. 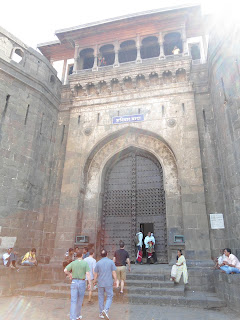 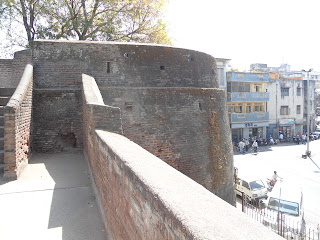 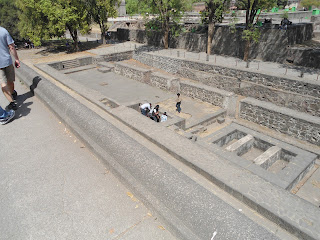 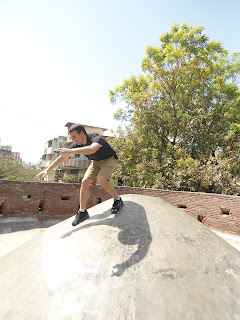 Of course when I tried to kind of surf down I ended up on my ass on the ground.  Oh well.  At least I made it to the top. 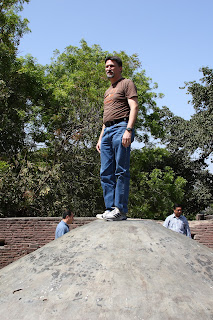 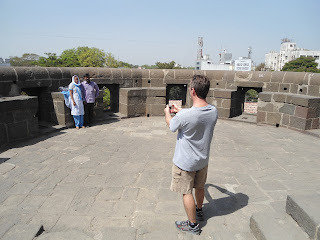 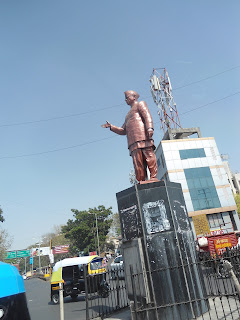 A picture of the security pylons at entrance to the hotel parking lot. 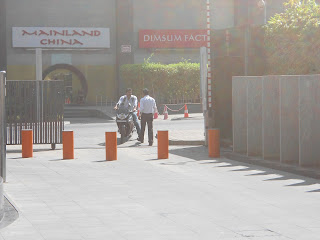 I can't remember what this is called, but spicy lentils I ate over rice.  Very good!  I think I could almost be a vegetarian in India!  Almost, but not quite. 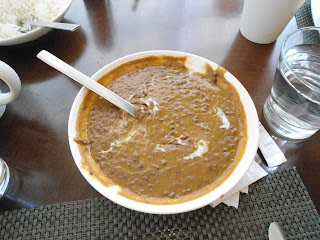 The engineer gang our last day in India 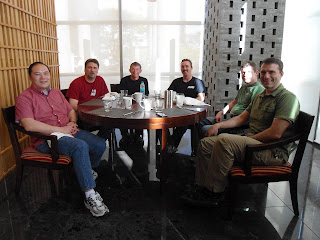 Next China!  And it should be less than 2 weeks this time...