One of my favorite countries I've traveled to is Russia.  Part of it is the history, I have always loved history, and for some reason I was always interested in Russian history.  Now I had no idea, at all, that I would ever get to travel there growing up.  I grew up in the 60's and 70's... and the Russians, the Soviets, were our sworn enemies.  How could I ever go there?  I had a couple of professors at Purdue who were from Russia, and a good college friend worked in Russia for about a year, ending when he was back in the US on home leave in August 1991 and there was an attempted coup in Russia.  Greg loved his time there... loved the people.  And I do too.

My first trip to Russia was to a diamond mine near Aikhal, Siberia... in February.  When the plane landed the temperature was -39 degrees.  That was the warmest it was the week I was there.  That first night we went out to eat at a restaurant, I think I have some pictures I will try to find sometime, but this is not about that right now so I'm not going to look for them.  And as we ate, we drank... vodka.  And by that I don't mean we drank mixed drinks, or sipped it genteelly, or took our time about it.  We drank shots, in toasts, just like I always saw in the movies, but I never really believed was real.  And as we drank, I learned.

I learned vodka is better ice cold, it was kept outside on the window ledge as we ate.  I learned that once a bottle is opened, it must be finished, or it is bad luck.  I learned that once a bottle is emptied it must be removed from the table, or it is bad luck.  I learned that the 3rd toast is for the women in everyones' lives.  (I have also read among soldiers it is for those who have died in war)  And I learned that, rightly or wrongly, drinking and eating with the local people, like the local people, is a great way to earn their trust and friendship.  (I also learned years later, on my most recent trip to Russia, they know the right things to toast as well.  This was my first international trip after our grandson Allie died and 1 night at supper I got teary, then downright weepy talking about him.  I got a couple of hugs and pats on the back,  Then we did a toast to Allie.  And my family.  And several more after that.)

There were 7 of us at dinner that night, and we drank 3 bottles of vodka.  I had talked, some, mostly through the local Cummins person I was with who was acting as my translator, and as dinner was wrapping up I felt I had to say something.  Now this was not meant as a toast, all the vodka had been finished, all the empty bottles removed, it was merely me thanking them.  I don't remember exactly what I said, time and said vodka consumption might have something to do with that, but to paraphrase I said "I just want to thank everyone for having me here and being so welcoming.  I grew up in the 60s and 70s and I never imagined I'd be here.  It's been great so far and I look forward to many more trips to Russia"  Igor, my translator, immediately shook his head and smiled and the man next to me, who hadn't said 5 words of English all night, slapped me hard on the back and said "Open another bottle!  That's a toast!"  So a 4th bottle was opened, and finished.  And I've loved Russia ever since.

Now when people come to Columbus from our Moscow office it's not unusual for me to get an e-mail; You have special Russian souvenir at your desk.  Which means another bottle of Russian vodka.  And we only drink it ice cold, out of the freezer, as shots, giving toasts, with our closest friends.  We drank a bottle before the Indianapolis 500 with our closest friends in the world from Purdue.  We drank a bottle the night Bob turned 50, and George turned 50 the next day.  And we drank a bottle the night before Mr. Levora's memorial service, in honor of him and his life.  And the 3rd shot was for the women in our lives, but especially for Mrs. Levora.

Now to pivot just a bit.  One of the best books, or series, I have ever read is The Bronze Horseman series by Paullina Simons.  It is set in Russia and opens just as Germany is invading Russia in 1941.  It has many of the elements I love in a story;  History - check, WW II - check, heroes and heroines I can look up to and respect - double check, and it's a great love story.  One of the elements in the series is Tatiana cooking for those she loves, and it is described in such exquisite detail I could almost taste it.  It turns out there is another book, Tatiana's Table, that has most of the recipes described in the books as well as more of the story of Tatiana and Alexander.  It is also out of print and ridiculously expensive used.  I have become friends with a great group of people through the Outlander series here, and Peggy let me borrow her copy of the book.  Superbowl weekend we ate Russian here... Borscht and Cabbage Pie on Saturday, leftovers and Blinchiki on Sunday.  It was great and I enjoyed reading the book, but I left on my trip before I could finish it.  I offered to send it back to Peggy but she said it could wait till I got back, so I decided to take it on a little adventure.

This was in India... I know, it could be any hotel window with palm trees, but the trip was very rushed and I didn't have an easy way to take it with me. 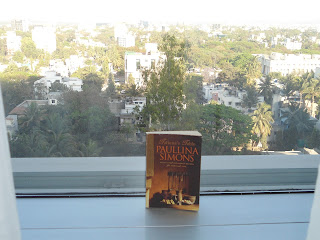 This was in Beijing... I know, it could be any high rise hotel with a dirty window... I guess I need to give more evidence. 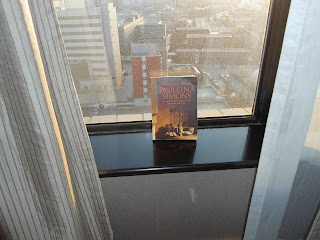 Me and the book on the Great Wall.  From where we parked pretty much 35 minutes walking UPSTAIRS to the wall.   But what a view... truly amazing. 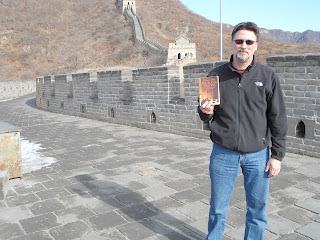 Me and the book in the Forbidden City.  I'd walked around it before (Holy crap that's a long walk!) and been through the part you didn't have to pay for, this was my first time inside. 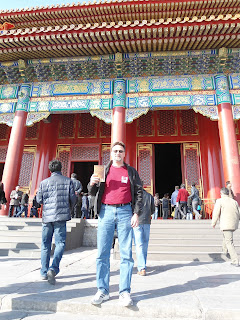 So thank you Peggy!  I got to finish reading the book, it got to see some sites, and log a lot of air miles.  I will get it back soon, I promise!
Posted by Clay at 8:01 PM